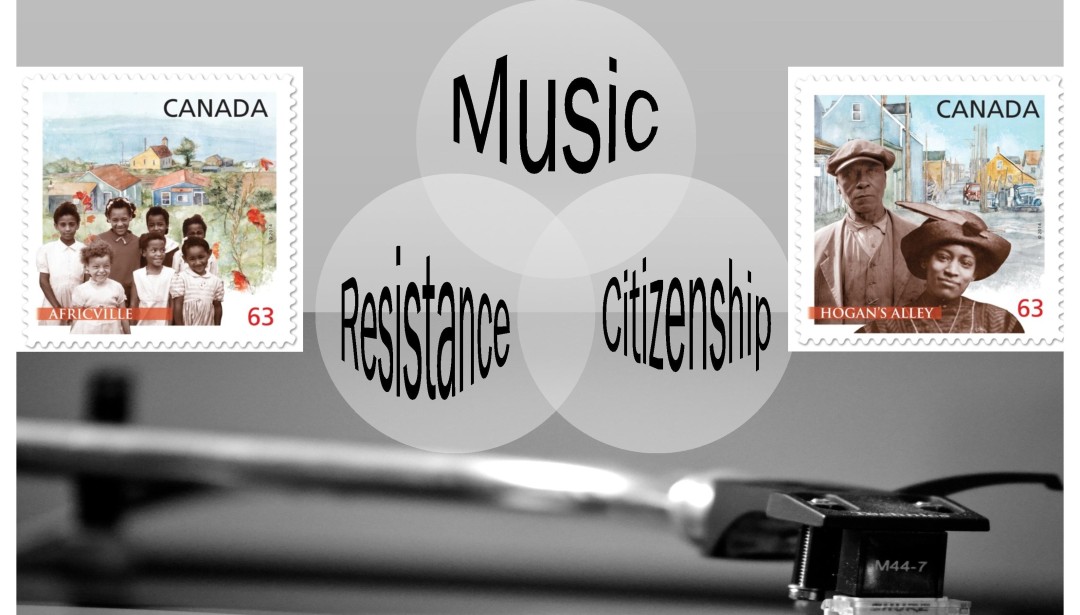 Next week I am competing in an event where you have to deliver your thesis in 3 minutes with no more than one basic slide. This is quite a daunting task, and given that my 300+ page thesis (in a draft version currently) covers so much, and given that I don’t really have time to discuss any of the specific poetry in detail, I thought I’d primarily touch on some of the larger themes around music and citizenship. I often get asked, so what’s the gist of your thesis? In 3 minutes it sounds  roughly like this:

I will briefly outline how music and citizenship relate to my thesis project, Soundin’ Canaan: Music, Resistance, and Citizenship in African Canadian Poetry, which is about historical recovery and imagining Canada’s future. Like the image of a needle touching down on the historical record, the past tells us much about where we can go, for as Amiri Baraka states, “The future is always here in the past.” Most Canadians don’t even know slavery existed in Canada, and few are aware of the historical black communities in Canada such as Hogan’s Alley in Vancouver and Africville in Nova Soctia, which thanks to the work of the poets in this thesis hasn’t gone unnoticed: Canada Post, as part of Black history month (2014) commemorated Hogan’s Alley and Africville on a stamp. Soundin’ Canaan (Canada was often referred to as Canaan in spirituals during the black migration to Canada), draws from a cross-fertilization of communicative techniques to examine how citizenship is reexamined by African Canadian poets’ resistive soundings.

Centered on the poetry of M. NourbeSe Philip, George Elliott Clarke, Wayde Compton, Dionne Brand, and rapper K’naan, my dissertation builds on the work of scholars who have admirably mapped and written about African Canadian literature. Uniquely it examines how many African Canadian poets draw from African American and pan-African musical forms (including blues, jazz, hip-hop, reggae, dub, and so on) in order to remap the concept of identity and citizenship. Soundin’ Canaan, addresses the politics and ethics of Canadian multicultural policy and citizenship—focusing on intersections between music and text as a border-crossing praxis. I ask: what does Canadian citizenship sound like, particularly as voiced by African Canadian poets interested in a fluid citizenship that moves, like music, between local and global spaces?

Idealistically, citizenship—like music—is not confined to any single space. While in prison, Nelson Mandela listened to Marvin Gaye’s “What’s Going On,” an act Paul Gilroy describes as “The global dimension of diaspora dialogue [made] momentarily visible.” Essentially, music travels across borders, and through such sonic imagining, the value of a global (yet still often regional) citizenship is avowed. My methodology itself is closest to the practice of DJing, which provides a malleable guide to my murky topology: DJs mix multiple records by using various constituent elements of rhythm, timbre, texture, and overall sonic experience. In essence, I ask what happens when you put a mixer and crossfader between several diverse cultural realities?

By looking at citizenship through the lens of music as an often dissonant site (or text) of struggle and identity formation, Soundin’ Canaan demonstrates how music in African Canadian poetry is not solely aesthetic, but a form of social, ethical, and political expression. What happens when those not normally seen as citizens with full rights—the disposable—are brought more into the picture and seen as co-performers of the Canadian remix project? No longer for the elite alone, citizenship is to be universally confirmed for all Canadians.

Canada signified as Canaan represents faith and contradiction for the poets explored in this thesis. Isolation can only create more of the same, and so multiculturalism, reimagings of citizenship and Martin Luther King, Jr. and Pierre Elliott Trudeau’s notions of The Just Society present an opportunity to moderate disorder and fragmentation by embracing difference through fraternity. Much of this thesis is an idealization of what Canadian multiculturalism can aspire to be: a gesturing towards a more equal and free society for all its members.

One thought on “Soundin’ Canaan in 3 Minutes”