Since January 2012 I’ve curated an Oral Histories Special Project for the Improvisation, Community, and Social Practice Project.  The ICASP project plays a leading role in defining a new field of interdisciplinary inquiry in Improvisation Studies. The project’s core hypothesis is that musical improvisation is a crucial model for political, cultural, and ethical dialogue and action.

Oral Histories is a showcase of interviews, performances, and articles by and about improvising musicians, artists, writers, and scholars. This monthly feature offers an intimate look inside the minds and practices of some of the many dynamic, innovative people whose energy and ideas make improvisation studies such a vibrant field of inquiry. The Oral Histories project provides a space for improvising artists to be heard in their own words, often in dialogue with other improvisers, scholars, and practitioners. Back in 2012, I wrote a short reflective piece on the idea behind the project, musing on the relationship between orality and improvised musical practices. That short reflection can be found here.

The project has also been useful for my PhD thesis, Soundin’ Canaan: Music, Resistance, and Citizenship in African Canadian Poetry, since the thesis contains audio/visual interviews (many archived under the Oral Histories project) with several poets explored in the thesis (including M. NourbeSe Philip, George Elliott Clarke, Cecil Foster, d’bi.young, Wayde Compton, and others). Future Oral Histories will include the legendary South African pianist Abdullah Ibrahim, the late Amiri Baraka in conversation with William Parker, and more!

View Past Oral Histories below:

Featured photo of Paul Watkins in conversation with d’bi.young. 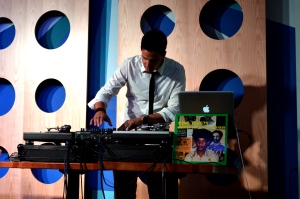 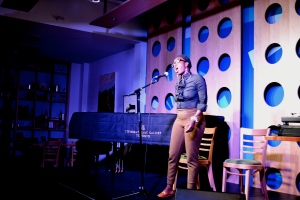 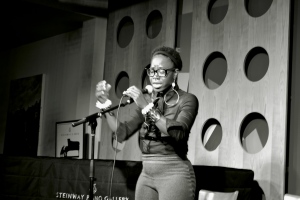 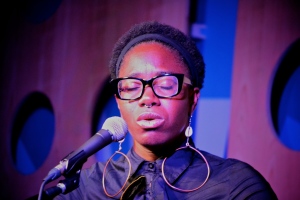 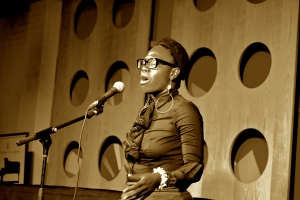 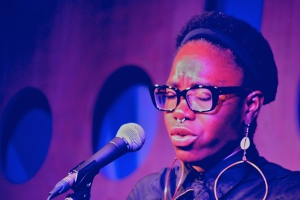 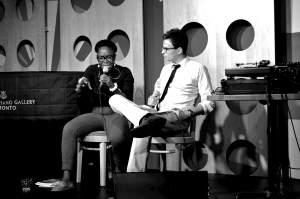 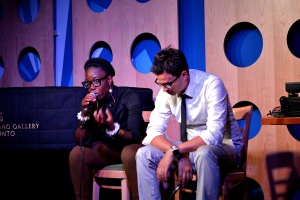 Dub poetry is a form of performance poetry with a West Indian aesthetic and origin. It evolved out of dub music comprised of spoken word pieces over reggae rhythms and Nyabinghi traditions[i] in Jamaica beginning in the 1970s. Rather than the Jamaican form of “toasting” (a significant stylistic influence on hip-hop), which also featured (often improvised) spoken word, sometimes as chant, to the music of the dancehall DJ, a dub poet’s performance is usually pre-written and prepared. Spoken or chanted with the background of reggae rhythms, or a capella or ital, and using Jamaican Creole/Patois, dub poetry effectively blends African and Caribbean oral and griot traditions with more standard approaches to poetry and performance. Basically, dub performances were created by removing vocals from side A of a record with a dub machine to create a B side containing a rhythm/instrumental track, often amplifying the bass and drums. Traditionally dub poets are closely aligned with DJs—yes DJing is both traditional and tradition—as they reanimate and (re)sound the past in the present through a musico-poetic performance atop a tentative original.

Conventionally, “Jamaican Creole is the natural language of dub poetry” (Afua Cooper, Utterances 1) and while dub poets often privilege reggae music, nearly all forms of African American and Afro-diasporic musics, and others, can be used in the performance of a dub poem as the mode continues to evade a single homogenizing definition or approach. Nevertheless, dub “began as, and remains, rebel poetry” (2). This is not to say that dub poetry eludes the possibility of definition. d’bi.young.antifrika—one of Canada’s most renowned dub poets and dub monodramatists—thinks through dub vis-à-vis her own mother’s manuscript on dub, which identifies the four major elements of the then emerging form: music, language, politics, and performance (“r/evolution” 27). Dub as such bridges the personal and the political, and as d’bi developed her own understanding of dub she added four more elements for a total of eight principles to form the acronym s.o.r.p.l.u.s.i: “urgency, sacredness, integrity, and self-knowledge. I then renamed the earlier elements of music, politics, and performance to rhythm, political content and context, and orality” (27).

In the following video d’bi outlines how these eight principles can empower artists, particularly African artists across the diaspora.

For d’bi, the principles of dub poetry—consisting of self-knowledge, orality, rhythm, political content and context, language, urgency, sacredness, and integrity—combine to comprise “a comprehensive eco-system of accountability and responsibility between my audiences and me. each principle in the methodology challenges me to not only be self-invested but to (re)position to the centre of my micro and macro communities, being both accountable and responsible (able to account for and respond to these communities)” (“r/evolution” 27). As such, dub poetry has the power to connect disparate communities together through lines of solidarity. Two days from now, on August 8th, I will have the privilege of interviewing d’bi.young about her practice as a pioneer in the art of dub poetry and theatre. I hope to see you there for what promises to be an exciting and engaging evening of “Word! / Sound! / Powah!”

Here’s the poster for the event, d’bi’s personal page and youtube page, as well as the facebook event page.

[i] The Nyahbinghi Order is the oldest of all the Rastafari mansions and the term translates as “black victory” (niya = black, binghi = victory). The Niyabinghi resistance inspired a number of Jamaican Rastafarians, who incorporated niyabinghi chants into their celebrations (Wikipedia). The rhythms of these chants—full of improvised syncopation— greatly influenced popular ska, rocksteady and reggae music. 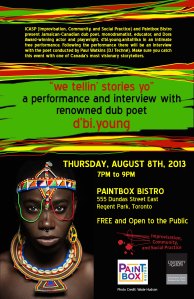 ICASP (Improvisation, Community, and Social Practice) and Paintbox Bistro present Jamaican-Canadian dub poet, monodramatist, educator, and Dora Award-winning actor and playwright, d’bi.young.anitafrika in an intimate free performance. Following the performance there will be an interview with the poet conducted by Paul Watkins (DJ Techné). Make sure you catch this event with one of Canada’s most visionary storytellers.

Enjoying a beer made by a former clown and listening to Charles Mingus’s The Clown. If you’re in Sooke, look up @checkerheadbrewing (they’re not officially open yet, but hopefully soon!). #charlesmingus #theclown #craftbeer
Late afternoon vibe: Bob Marley & The Wailers (singles 1970-1972). #bobmarleyandthewailers #thebestoftheupsettersingles #leescratchperry #bobmarley
This week in my FILM 220 class we are watching and discussing Parasite and I made this short video essay for my lecture. In the video I focus on the aspect of social inequality as represented through the parasite metaphor. If you click on the link in my bio it will take you to my page where you can find the YouTube video. #Parasite #bongjoonho #videoessay #film #filmcommunity
I love lighthouses, and the Sheringham Point Lighthouse is particularly beautiful. @sheringhamlight #fujifilmxt3 #sooke
[insert cheesy and inspirational caption]. Phoenix on Sugarloaf Mountain. #sugarloafmountain #explorenanaimo #fujifilmxt3
Ella in green. #happystpatricksday
Loading Comments...
Comment
×