I’ve drafted a writeup of the historically renowned Rockhead’s Paradise in wikipedia style. I actually intend to make a wikipedia page for Rockhead’s, since there surprisingly isn’t one for Rufus or his legendary club. 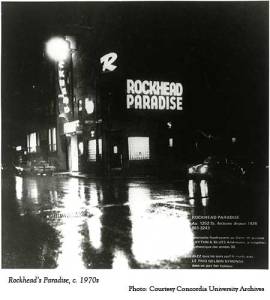 Rockhead’s Paradise—along with other jazz clubs in Montreal, such as The Nemderoloc Club [colored men spelled backwards], The Boston Café, and The Terminal Club—helped established Montreal’s reputation as “Harlem of the North” (See Gilmore, Swinging in Paradise; Winks, The Blacks in Canada 332-35; Williams, Road to Now 44; Israel, “Montreal Negro Community” 189-95.) Of all the jazz clubs in Montreal throughout the twentieth century Rockhead’s Paradise, located at 1254 St. Antoine Street, was the most popular until it closed its doors permanently in 1980 when it was sold and then shortly thereafter demolished, followed by the creation of the Ville Marie Expressway overhead which solidified the club’s demise (Brownstein). During it’s fifty year tenure numerous renowned jazz players were drawn to Rockhead’s Paradise, including Duke Ellington, Louis Armstrong, Fats Waller, Cab Calloway, Billie Holiday, Ella Fitzgerald, Leadbelly, Nina Simone, Dizzy Gillespie and Sammy Davis Jr., among countless others.

The three-story club was founded in 1928 by Rufus Rockhead, a Jamaican-born railway porter who was able to draw some of the biggest names in blues and jazz during Montreal’s Sin City heyday from the 1930s to the 1950s (Brownstein). Rufus Rockhead opened the club with the income he earned on the rails as a porter, and then later as a bootlegger, allegedly running booze for Al Capone (Mathieu, North 71; 201; 240). Initially Rufus Rockhead opened the operation at the Mountain Tavern on St. Antoine and Mountain St. with hotel rooms on the top floor; eventually, he converted the second and third floors into a cabaret (Miller 172). Even though African Canadians were unable to get liquor licenses, Rufus used what sway he had among friends to help him get the license. After three years of running the Mountain Tavern, Rufus parlayed the tavern into the jazz club Rockhead’s Paradise (Gazette). The club was located in Little Burgundy, an area known for producing talented jazz musicians, most notably Oscar Peterson and Oliver Jones. While the club was particularly popular—given its long tenure and the caliber of jazz musicians who played there—many white Canadians felt that jazz and the crowd it attracted, “jeopardized white Canadians’ morality and white womanhood in particular” (6), as Sarah-Jane Mathieu contends through historical documentation in her book, North of the Color Line: Migration and Black Resistance in Canada, 1870-1955.

During its last years of operation, the club was the home of Rising Sun (Soleil Levant), which was a jazz, blues, and reggae club (Miller, 170; 173). In 2012, 32 years after Rockhead’s Paradise was demolished, pianist Billy Georgette organized “Rockhead’s Last Jam” to honour the now legendary iconic jazz figure and club along with some of Montreal’s luminary jazz musicians and stalwarts who got their start at the Little Burgundy jazz club, including: Oliver Jones, Billy Georgette, Norman Marshall Villeneuve, Leroy Mason, Glenn Bradley and Richard Parris, among other notables, for what was perhaps their last collective jam (Brownstein). As Georgette recalls: “It was quite the place. I believe it was the first club owned by a black in Montreal and maybe in all of Canada. And the tavern was reputed to have the longest bar in the city at 75 feet. There was so much going on at the time. Not just the music. I remember the hookers, who were almost motherly to us. There was so much excitement there. But then modern construction just wiped it all off the map. It’s such a pity” (Brownstein).

I can’t wait to see the documentary, Burgundy Jazz, about jazz in Montreal, and which will likely feature Rockhead’s Paradise.

Miller, Mark. The Miller Companion to Jazz in Canada and Canadians in Jazz. Canada: The Mercury Press. Print. 172.