Sex Mob is a New York City jazz group, which initially began as a way to feature the slide trumpet of leader Steven Bernstein. Since then the band, as Bernstein’s website states, has developed an overarching mandate: “to put the fun back in jazz music.” The band is comprised of Bernstein on slide trumpet, Briggan Krauss on alto sax, Tony Scherr on bass, and Kenny Wollesen on drums. The group first formed in the 1990s as part of a residency at the Knitting Factory, and their early material consisted primarily of Bernstein originals. That changed when Sex Mob played Bond Themes as part of an evening of film music, such as “Goldfinger” and “You Only Live Twice,” which eventually culminated in a 2001 album, Sex Mob Does Bond. To Bernstein’s surprise the crowd went wild, and Bernstein realized that the audience was more in tune with their adventurous music if they could recognize the tune. And so their songbook expanded to feature everything from Prince, Paul McCartney, The Rolling Stones, to The Grateful Dead, and even the “Macarena,” although you’ve never heard the “Macarena” like this before.

The guiding principle to their song selection is that the tune would have to be recognizable enough that it could withstand some serious compositional and improvisational destruction. The group still plays many Bernstein originals, although their sets now feature a great deal of covers given a humorous, yet sophisticated avant-garde reworking. As Bernstein unapologetically states in Jazz Asylum, “I realize that’s what jazz musicians have always done. That’s how Lester Young got popular; it’s how Charlie Parker got popular; it’s how Miles Davis got popular; that’s how John Coltrane got popular. They played the songs that everyone knew and because they could recognize the song, then that invited them into their style.” In many ways Bernstein is right, as the jazz tradition has always included space to take familiar songs and reassemble them with your own unique spin.

Since their 1998 debut, Den of Inequity, Sex Mob has released a diverse oeuvre of radical, yet accessible material. Their 2000 release, Solid Sender, continues their bold prewar jazz spirit through another mix of covers, everything from Nirvana to ABBA, with a dose of Bernstein originals. The same year saw the release ofTheatre & Dance, part Duke Ellington compositions and part Bernstein originals written for a renewal of the 1926 Mae West play “Sex.” Sex Mob continues to defy expectations, and their 2006 release, Sexotica (Thirsty Ear) is a homage to the soundscape of Martin Denny (the “father of erotica”), receiving a Grammy nomination for Best Contemporary Jazz Album. 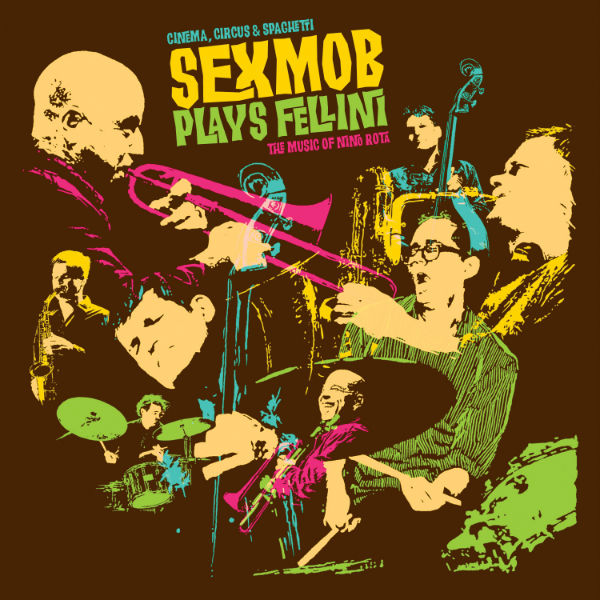 Their latest release, the 2013 Cinema, Circus & Spaghetti (Sex Mob Plays Fellini: The Music of Nino Rota), contains Sex Mob’s idiosyncratic arrangements over Nino Rota’s memorable scores. The title comes from a quote from Italian director Federico Fellini, who said, “My films, like my life, are summed up in circus, spaghetti, sex, and cinema.” The same could be said of Sex Mob’s exuberant music. Sex Mob Plays Fellini, like their earlier albums, will certainly offend jazz purists. I assume that’s part of the point. Love or hate their brashness, Bernstein summarizes the Sex Mob ethos as about having fun: “Jazz used to be popular music. People would go out to clubs, listen to the music, go home, and get laid. Simple as that. We’re bringing that spirit back” (All Music Guide). Sometimes it’s nice to simply get lost in the music, dance, and go out and enjoy la dolce vita.