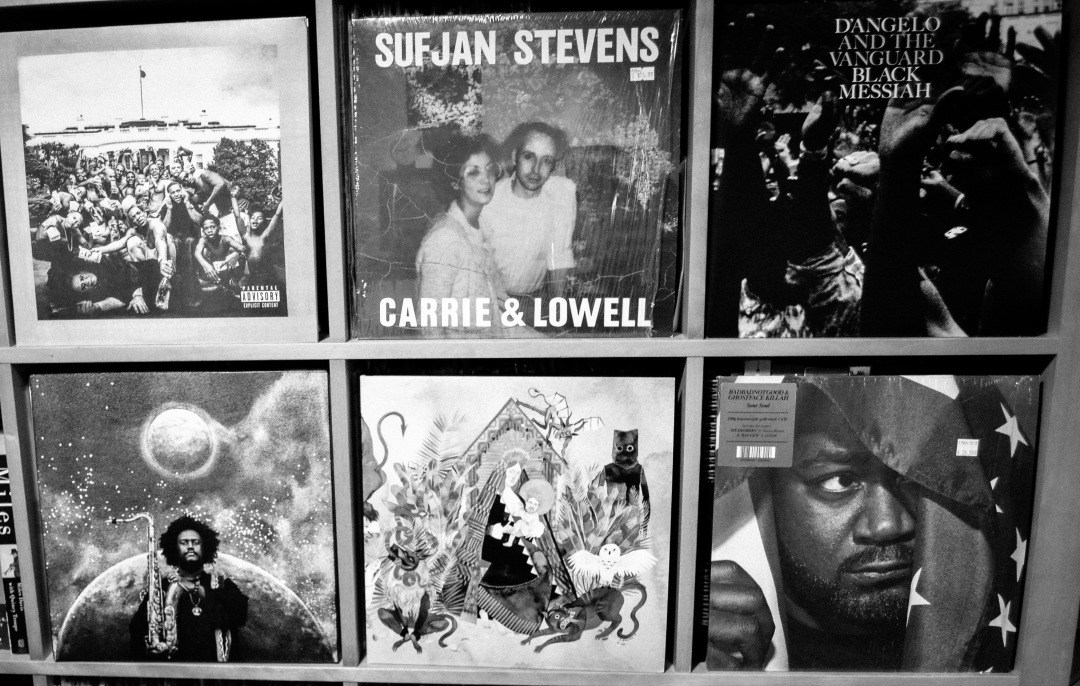 There was a lot of great music released in 2015. I could easily compile a list of the 50 Best Albums of the year, but instead I am keeping things simple and mentioning the 5 albums that made the deepest impact on my listening last year. If the list was longer, it would include such fantastic releases as Jamie xx’s In Colour, BadBadNotGood and Ghostface Killah’s Sour Soul, Panda Bear’s Panda Bear Meets the Grim Reaper, Four Tet’s Morning/Evening, Max Richter’s Sleep, and Colin Stetson and Sarah Neufeld’s Never Were the Way She Was, among many others. Here’s the list of my 5 favourite albums of 2015 with a selected track from each record.

Josh Tillman’s second release under the moniker Father John Misty tells the story of his courtship of his wife, Emma. This is a really fun record that reads like one long self-reflexive joke that we are let in on. This album is all about juxtaposition, placing caustic irony beside blunt declarations of love.

For those of us who listen to jazz, it’s exciting to see how the genre is being taken in new directions. Last year’s You’re Dead! by Flying Lotus drew on the spiritual jazz of Alice and John Coltrane to the progressive jazz fusion of Weather Report to the humourous and cosmic tones of Sun Ra. Kasami Washington’s The Epic, also on Lotus’s Brainfeeder imprint, builds on that format in a three hour jazz odyssey that digs deep into the past and pushes forward as a kind of generational intervention. The Epic features a 10-piece jazz band with augmentation from a string section and a full choir and holds its own with the best of fusion records. This is consciousness-raising music and it is getting lots of spins over here.

3. D’Angelo and the Vanguard, Black Messiah

14 years after the critically acclaimed Voodoo, D’Angelo returns with the militant, powerful, and funky Black Messiah. The album is incredibly layered with murky vocals, unsettled grooves, and fuzzy guitars, with deep roots in rock, funk, jazz, and gospel. It’s an album that recalls Sly and the Family Stone’s 1971 funk album There’s a Riot Goin’ On. An unbelievable comeback record from D’Angelo.

Sufjan Stevens’s beautiful Carrie & Lowell has been on repeat in our house since its release. The songs on the album are inspired by the 2012 death of his mother, Carrie, and the family trips they took to Oregon in Stevens’s childhood. For me, this album is up there with Seven Swans and Illinois. This album is Stevens’s most personal and mature and it is also his most stripped down record, which allows his abilities as a songwriter to shine through.

1.  Kendrick Lamar, To Pimp a Butterfly

Kendrick Lamar’s To Pimp a Butterfly provides an Umwalzung—that is, revolution—through a complete overturning of prior mainstream hip-hop album templates, as Lamar enacts one of the most ferocious black chants ever to appear on a hip-hop record. The album’s unforgiving blackness is important, because it reminds white listeners that sometimes we need to sit down and listen to the conversation that is taking place rather than try to control or shape it. This is art and music that is both relevant and functional, showing that you can make music that is both rhetorically powerful and aesthetically pleasing. Without a doubt, Lamar’s To Pimp a Butterfly is my favourite release of 2015. It certainly restored a lot of my faith in mainstream hip-hop. As David Jeffries puts it, “To Pimp a Butterfly is as dark, intense, complicated, and violent as Picasso’s Guernica, and should hold the same importance for its genre and the same beauty for its intended audience.”

I’m really enjoying the newly released live recording of A Love Supreme, which was recently discovered from a 1965 private tape. Coltrane and his band (with Pharoah Sanders) are at the edge Coltrane’s budding avant-garde inspirations and it’s a beautiful and powerful listen. #johncoltrane #pharoahsanders #alovesupreme #alovesupremeliveinseattle
I was stoked to find a copy of Promises by Floating Points, Pharoah Sanders, and The London Symphony Orchestra at my local record shop (@fascinating_rhythm_nanaimo). It’s such a beautiful record and a late-career gem from Pharoah Sanders! #floatingpoints #pharoahsanders #londonsymphonyorchestra #promises
Morning spin: #chillygonzales #solopiano
Allison Miller’s Boom Tic Boom’s Otis Was A Polar Bear is an adventurous, creative, and fun listen. #allisonmiller #otiswasapolarbear #jazz
Rest in Power Lee “Scratch” Perry. He was a true pioneer of sound. #leescratchperry #superape #dub #reggae
Enjoying these two late 70s gems from Alice Coltrane today: #transcendence and #transfiguration. #alicecoltrane #jazz
Loading Comments...
%d bloggers like this: